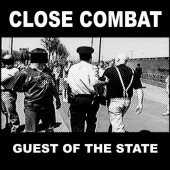 GUEST OF THE STATE

NOTICE: CLOSE COMBAT OFF STAGE FOR WHILE.

(check the blog for details)

Somewhere around summer 2002, Close Combat was born in the legendary hardrockcafe "de Gaaspiep" (rip) in Maastricht. The band's intention was to have fun in the first place and play music in the vein of Cocksparrer, Cockney Rejects, 4-Skins etc. The first line-up was with Kasper on drums, Lando on bass, Lliam and Maurice on guitar and Pieter on vocals. After a while both Kasper and Lando left the band and got followed by Roger on drums and Merijn on bass.

With this line-up we went gigging around and recorded "Viva Mestreech!", a five track mini-cd with four songs in the Maastricht dialect, released by Rebellion Records Holland in 2004. The respons to this salute to our city where we are born, raised and probably die aswell, was overwhelming.

We did some more gigs in 2005 and spent our time making new songs.

In the beginning of 2006 we started to record the full-lenght album "Guest of the State". During recording Lliam had to leave us because his boss send him to England to work over there, and he had to fly up and down a few times to finish the album. At the same time Merijn started to work on a carreer as Tattoo-artist and sadly he had to tell us that his days in Close Combat were over. Kids, jobs, hospitals and prisons did the rest, so recording got hold up a bit. "Guest of the State" was released in october 2006 on Bandworm Records.

The empty spots in Close Combat were filled by Lliam's and Merijn's little brothers, Larn and Elmer, who were together in the Young Ones at that time. Some serious sets of rehearsels later, we were about to do some gigs in Germany, Larn told us he was going to move to Greece and Elmer had trouble to find time to rehearse, so he decided to quit. Gigs were cancelled and a hangover stepped in.

But just as a good old hangover does, it cleared up again! In september 2007 Jiph picked up the bass and Close Combat went rehearsing again. Bruised, but proud, in december 2007 we went to Magdeburg and Eschwege (Germany) for what we call the "Stau-Tour". Because of some disagreements with the law we had to cancel some shows in the beginning of 2008 but we managed to get to the Total Oi! Festival in Torgau and Oi! the Meeting in Wegeleben. Since then its very quiet till this day. But it is not over yet!

A SPLIT SECOND A 4 CLOSE COMBAT

Close Combat - Guest of the state

Close Combat - When we were Young