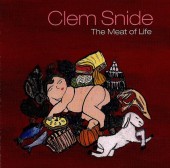 Location:
Nashville, US
Type:
Artist / Band / Musician
Genre:
Soul / Other
Site(s):
Site
Label:
Snideco / SpinART / Fargo
Type:
Indie
BioConnections
Eef Barzelay
Clem Snide began in Boston in the early 1990s. It was there Eef Barzelay and good friends Eric Paul and Jason Glasser first performed under that moniker. The band dissolved when Eef Barzelay moved to New York where he briefly dabbled in Art School and the Sidewalk café anti-folk scene before reconnecting with Glasser to reform the band and begin work on their first record “You Were A Diamond”. Their artistic partnership would become the backbone of Clem Snide, and would produce two of the bands seminal records, “Ghost of Fashion” and “Your Favorite Music”. Described by Robert Christagau as “true American deadpan” Clem Snide garnered critical acclaim for their unique brand of “art country” and enjoyed a brush with mainstream success when their song “Moment in the Sun” was chosen as the theme song for the NBC show “Ed”.

In 2002 Glasser relocated to France with his family and Eef carried on recruiting old Boston friend, multi-instrumentalist Pete Fitzpatrick and his cousin Brendan to complete work on the band’s third record, “Soft Spot”. In 2004 Eef moved to Nashville and recorded their fourth record “End of Love.” With the addition of Nashville bred drummer Ben Martin, the band did extensive touring for the next couple of years, which culminated in their return to the studio to begin work on “Hungry Bird.” Financial and interpersonal strife dogged the band throughout the recording process resulting in an “extended break” before they would release and tour behind the record. Barzelay, eager for a clean slate during that time, struck out on his own, releasing two solo records, “Bitter Honey” and “Lose Big” and created the score for the Sundance award-winning film “Rocket Science”.

In spring 2009, Barzelay reformed the band with Brendan Fitzpatrick and Ben Martin for the “Hungry Bird” tour. Heartened to find their fans still loyal and devoted as ever, Clem Snide began fleshing out Barzelay’s ripening batch of new songs, resulting in “The Meat of Life.” Recorded and mixed in the Fall of ’09 it came into existence with the deft engineering hand of Mark Nevers and help from local Nashville players Tony Crow (Piano, Organ), Roy Agee (Trombones), and And Carole Rabinowitz (Cello). Described Recently by Daytrotter.com as “one of the finest current songwriters in America, that get quietly ignored” Barzelay and Clem Snide have emerged true indie rock survivors with their best record to date.

Clem Snide - Forever now and then