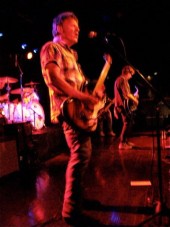 Billy has retired from playing and is now an artist (he had a gallery showing of his work at the Zeitgeist,in Inman Square),but longtime bassist Carl Biancucci is still in the fold,as is ex-Commandos/Ballbusters guitarist Jeff Crane on second guitar,and former V drummer Matt Burns.

This year sees the 20th anniversary of their 1986 Throbbing Lobster

album LASSIE EATS CHICKENS,with LASSIE being released on CD for the first time with extra cuts (including the original band's take on Lyres'

The "boys" are older now,and while not necessarily wiser,they still sound pretty great - Link Wray would be proud - so don't be a stranger.

I edited my profile with Thomas' Myspace Editor V4.1