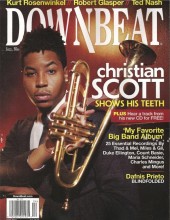 When trumpeter Christian Scott was growing up in New Orleans in the late ‘80s and early ‘90s, his grandfather gave him and his brother Kiel extra reading assignments each week as a supplement to their assigned schoolwork. If the young students failed to finish their books within the week, their grandfather would say, “Yesterday you said tomorrow…” It was the older man’s way of emphasizing the importance of recognizing the work at hand, and making the most of the available time to complete it.

In the end, the two brothers graduated at the top of their high school class at the New Orleans Center for the Creative Arts. Armed with a full scholarship, Christian headed north to Berklee College of Music, where he earned two degrees in two years and eventually launched a music career that has positioned him as one of the great innovators of his generation. But along the way, Scott has learned that there’s still much work to be done – not just within the jazz idiom, but also in the larger world in which jazz exists. Yesterday You Said Tomorrow, his March 30, 2010, release on Concord Jazz, reflects the legacy of some of his musical heroes of the ‘60s, and at the same time wields the music as a tool to address some of the very important issues of contemporary culture.

“I’ve never worked on an album as hard as I’ve worked on this one,” says Scott, who did the session work in April 2009 at Van Gelder Recording Studios in Englewood Cliffs, New Jersey. Scott co-produced with Chris Dunn, and veteran jazz engineer Rudy Van Gelder engineered the album. “I wanted to create a musical backdrop that referenced everything I liked about the music from the ‘60s – Miles Davis’ second quintet, Coltrane’s quartet, Mingus’ band – coupled with music made by people like Bob Dylan and Jimi Hendrix. The music from that era just had more depth, whether it was jazz or rock or folk or whatever. The political and social climate at the time was much heavier, and there were a few musicians who weren’t afraid to reference that climate in their work. The ones who did that – and at the same time captivated people in a way that referenced their own humanity – were the ones who ended up lasting the longest.”

Aided by guitarist Matthew Stevens, pianist Milton Fletcher, Jr., bassist Kristopher Keith Funn and drummer Jamire Williams, Scott addresses the issues head on, regardless of how uncomfortable the subject matter may be. He opens the set with “K.K.P.D.,” a track full of dark harmonies and tense, competing polyrhythms. The title stands for “Ku Klux Police Department,” a reference to what Scott calls the “phenomenally dark and evil” attitude by the local police toward African American citizens of New Orleans when he was growing up – and the similar dynamic that persists there and in other cities to this day. “If you’re black, and you get caught in the wrong place on the wrong night, they may do some Klan stuff to you,” he says. “That’s always the thought in the back of your mind.”

Scott wipes away some of the darker shades in “Eraser,” the melodic followup track penned by singer-songwriter Thom Yorke, co-founder and frontman of Radiohead (the song is the title track to Yorke’s solo debut, released in 2006). The aptly titled piece resets the tone of the overall recording, says Scott. “With that song, we’re erasing the issue that was raised in the previous song, and then the album starts,” he says. “Those first two songs are very much a part of the album, but they’re there to establish an environment where you’re willing to listen to whatever else we have to say, because you’ve been opened up to the validity of the original argument.”

The introspective “The Last Broken Heart” was inspired by the debate over gay marriage. “It’s a very challenging song to play, but the small dissonances within the song make it very captivating,” says Scott. “What could be more beautiful than two people deciding to love each other? It’s better than two people deciding to hate each other, but somehow that’s more acceptable.”

Scott freely admits that the subject matter within Yesterday You Said Tomorrow is anything but lighthearted. But like his grandfather, he has little patience for falling behind on the important work at hand that can’t wait. “There’s no better time than right now to fix all of the problems and issues that we face as individuals and as a society,” he says. “The problems that some of the musicians of the ‘60s addressed still exist. They may look a little different, but they’re still around. The intent of the album was to make a document that illuminated that fact, and illuminated the means to change the dynamics and solve the problems.”