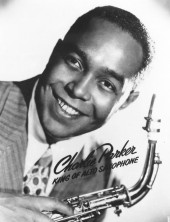 Location:
Kansas City, US
Type:
Artist / Band / Musician
Genre:
Jazz / Blues
Label:
Savoy 1944-1949, Dial 1945-1947, Verve 1946-1954
Type:
Major
BioConnections
Charles Mingus
Jimmy Smith
Lee Morgan
Charlie Parker was born in Kansas City, Kansas and raised in Kansas City, Missouri. He was the only child of Charles and Addie Parker. There is no evidence that Parker showed unusual musical talent as a child. Parker's father presumably provided some musical influence; he was a pianist, dancer and singer on the T.O.B.A. circuit, although he later became a Pullman waiter or chef on the railways.

Parker began playing the saxophone at age 11 and then at age 14 he joined his school's band. Groups led by Count Basie and Bennie Moten were the leading Kansas City ensembles, and doubtlessly influenced Parker. He continued to play with local bands in jazz clubs around Kansas City, Missouri, where he perfected his technique with the assistance of Buster Smith, whose dynamic transitions to double and triple time certainly influenced Parker's developing style.

As a teenager, he had developed a morphine addiction while in a hospital after an automobile accident, and subsequently became addicted to heroin, which was to plague him throughout his life and ultimately contribute to his death. Parker's heroin habit caused him many problems with missed gigs and getting fired for being high. In order to keep his "buzz" going he would frequently resort to busking on the streets. Parker's addiction unfortunately created the impression (for many musicians of his era) that his musical genius was somehow related to his drug use. For about a decade following Parker's death, jazz was closely associated with narcotics, and many musicians began using drugs, partly in imitation of their musical idol.

The legend "Bird Lives" first appeared as graffiti in New York City subways, a few hours after Parker's passing. For this, the poet Ted Joans is usually credited. A Far Side cartoon entitled "Charlie Parker's private hell" shows him locked in a recording booth while the devil pipes in nothing but new age music. Charlie Parker has been an inspiration to many people including John Coltrane, Michael Brecker, Jaco Pastorius, and Yo-Yo Ma.