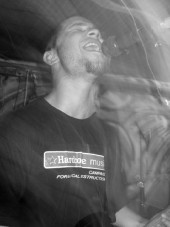 Chips-guitar and vocals- played in Scud and N.S.I.B., and Jasminka- played bass in Pbuka. January 3.1998. the band recorded 5 songs in studio imi, Velika Gorica.The songs were supposed to be released as a 7'' EP "Scent of the first" by "Dirty old town". Unfortunally, "Dirty old town" had some problems at the time and the EP was never released. By the end of the year band took a long break following other obligations.

In 2002. we started thinking about playing again and finally in autumn 2003. we got together. This time the band joins Vricha (who played guitar in F.O.D. and N.S.I.B.) and we changed the name to CARL HUNTER.

Carl Hunter - All Through The Night (Rare Northern Soul)