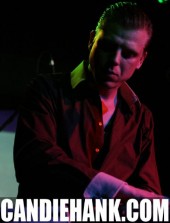 74 Min Booty Bounce Mix that's slapping you with lots of bangers and hits. Also includes tons of my own Mash Ups - silly dumb and fun tracks I made in the last years. A lot of it is still unreleased and even more is just made for being played at parties.

Groucho running is a scientific term describing the swift running movement of elephants. These animals can reach their top speed thanks to a technique that appears quite funny at first and reminds us of the legendary Groucho Marx.

Candie Hank (the mischievous alter ego of Patric Catani) has been messing up the musical landscape from Tokyo to Sao Paolo for some time now. It all started with a cover of France Gall's 'Les Sucettes' in collaboration with Hanayo, followed by the albums Kimouchi on Gagarin Records, Brandy Cramps on the French label Wwilko and a CD release on Solzne Records in Russia (Messer Chups). Despite multiple other releases with A*Class, Very Impossible Person, Puppetmastaz, among others, as well as various theatre and film soundtracks, the artist preferred in this case to produce the album secretly and as a result ended up on the brink of insanity.
And it had all started so nicely with Candie. Even though his first experience in business with his then project, E De Cologne, is kind of a painful memory in his (tender) heart, he nevertheless managed to throw in his extreme and absurd music smoothly and funkily, again and again, as if he were throwing a bottle of good wine into a ballroom.
At the age of 16 the first remixes for Mouse on Mars (Vulvaland) under the moniker E De Cologne & Test Tube Kid, appeared. Then in 1995, there was the move to Berlin enabling the start of the band with Gina V D'Orio (Cobra Killer), EC8OR.
Various tours and releases in Japan and the US followed; in 1997 EC8OR opened for The Prodigy in Japan. The Beastie Boys label, Grand Royal, licensed EC8OR's album All Of Us Can Be Rich for North America and Canada.
In 1999 Patric Catani produced the first hip hop tracks for the monumental radio play 'Steve Hive' together with Paul PM (Wordsound / Blackhoodz). In 2000, together with Gonzales, he produced the first tracks for the Jew Funk project , along with more and more collaborations with musicians such as Max Turner and Angie Reed. 2000 also saw Candie Hank's first performances in Tokyo and Osaka.
As mentioned earlier, Candie's life hasn't always been all jet set and pure luxury, and of course, there have been one or two confrontations with colleagues. But even in difficult situations he always managed to come to the right decision in the end, strengthening his ever-expanding ego. Sharp tongues describe him as some kind of mogul by now. If you don't find Candie very likable, Hank only confirms this impression. However, its really only on stage where he truly lets his arrogance loose. It's salon music for vampires -- laid back terror. It's a frantic ricochet shot through the rubble of gone eras, a jellyfish tango of the future. Regardless, at the end of the day Candie Hank couldn't care less whether digital world music is wanted or not. In his eyes it just turned out to be 'a mixed German record'.

Some of my music was used in theatre, film and audioplays. Check this collage I did with several used but also unreleased / brandnew songs::

If youre interested in buying my music you can either go to my Label : WWW.SONIG.COM or you can have a look on Itunes or Beatport where they sell various projects, Albums and Soundtrack music of mine.

What Is Your Name

Peace! (With My Demons)

Candie Hank - They call me Hank