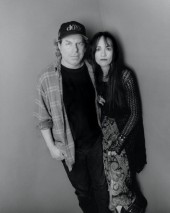 Buddy Miller began his career in the early '60s as an upright bassist in high-school bluegrass combos. Later, Miller traveled the back roads of America as an acoustic guitarist, eventually landing in New York City, where his Buddy Miller Band included a young Shawn Colvin on vocals and guitar. Eventually relocating to Nashville, Miller has become one of music citys most valuable assets, doing session work on albums by Jim Lauderdale, Victoria Williams, and Trisha Yearwood, among others and earning praise from fellow greats like Steve Earle, who has called Miller the best country singer working today and Emmylou Harris who has said Miller is one the best guitar players of all time.

In Nashville, Millers songwriting also began to garner major attention with artists like the Dixie Chicks, Lee Ann Womack and Brooks and Dunn cutting Miller-penned songs. Over nine years, the ambience of his home studio and favored machinery have become instantly recognizable. At the same time the experimental, concept-driven edge of his arrangements and mixes have become a point of fascination and admiration by musicians, producers and fans.

With a career spanning six albums, including the Grammy-nominated Buddy and Julie Miller, recorded with his wife Julie, Buddys most recent release, Universal United House of Prayers has its soul firmly planted in the traditions of gospel and also in the roots-country music Miller knows and does so well. His extraordinary talents writing, recording and producing have allowed Buddy Miller to create a niche in American music that he can truly call his own.

D'Addario The Six Who Made Me: Buddy Miller