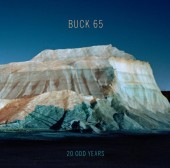 Location:
nowheresville, Nova Scotia, Ca
Type:
Artist / Band / Musician
Genre:
Other
Site(s):
Site
Type:
Major
BioConnections
Cat Power
Tom Waits
Charlotte Gainsbourg
Tunng
Electrelane
Sophie Ellis-Bextor
Scout Niblett
SILVER JEWS
Strange Famous Records
Blanche
Skratch Bastid
Greetings From Tuskan
Bike For Three!
I recorded a song back in 1990 called “The Rhyme Has To Be Good”. I made the beat, rapped and did the scratches all myself. I began teaching myself how to do those things several years before, secretly, in the privacy of my bedroom. I grew up in a small rural town called Mt. Uniacke in Nova Scotia and none of my friends were interested in hip hop music. Ironically – given the title – that first song isn’t very good at all. But we all have to start somewhere.

“The Rhyme Has To Be Good” got played on the college radio station in the city (Halifax) a few times and soon I started meeting other rappers and DJs. In the early days, it was mostly about performing – in living rooms, at dances, on the radio, in the woods, on roofs or wherever. I was never the most talented guy around, but it was a huge passion and I took it all very seriously – even when I was acting like a goofball. A few years later, the focus turned to recording. Through the 90’s I recorded countless songs with friends and on my own. For most of those years my efforts went unheard outside my hometown and sadly, a lot of those recordings have been lost.

Toward the end of the decade (around 1997 or so) I began to find an international audience and a place in a wider underground community with the help of the internet. Small independent labels with names like Four Ways To Rock, Hand Solo and Anticon began to offer help. By 2000, I had a career on my hands. Music became my sole means of income. Somehow I managed to find my way around the world and pay off my student loans. My wildest dreams had come true.

Then, in 2002, after 12 years of independent hustle, I signed a big time record deal with Warner and moved to France. Since then I’ve worked with musicians from all over the world – some with big names, some with no name at all. And I’ve continued to work with my old friends from my hometown too.

For a while now, people have been saying that the music I make doesn’t exactly sound like hip hop. I think that’s partly because I often hear hip hop where other people might not. Sometimes I hear it in pre-war blues songs. I hear it in albums like New Values by Iggy Pop or Is This Desire? by PJ Harvey. I hear it in experimental recordings by William S. Burroughs or minstrel songs by Emmett Miller. It’s a curse.

My newest collection of songs is called 20 Odd Years. This time around I went back to the formula that worked so well on Talkin’ Honky Blues – I returned to Halifax to build some songs – from the ground up – with my friends Charles Austin and Graeme Campbell. We also called in a bunch of friends to contribute vocals. Plus, I recorded a song with my old pal Jo Run, who I’ve worked with since the early days. It’s a strange thing for me to consider, but there aren’t many people who were on the hip hop scene in 1990 who are still here today. I’ve seen a lot of talented people come and go in my time. I have no idea why I’ve lasted when so many others have not. I guess that’s up to you to decide. But despite my best efforts, I’ve never been trendy and maybe that’s had something to do with it.

Twenty years seems like a long time but the thought of slowing down or ‘hanging it up’ has not even crossed my mind. Will I still be at it when I’m 50 years old? I guarantee you that I will. There may not always be an audience, but that didn’t stop me in the beginning…