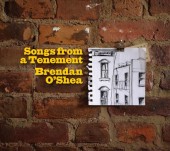 Location:
NYC, US
Type:
Artist / Band / Musician
Genre:
Folk Rock / Acoustic / Alternative
Site(s):
Site
BioConnections
Julia Kent
Ike Reilly Assassination
FairplayCollective
Jenna Nicholls
Mark Dignam
Colm Quearney
Originally from Killarney in the South West of Ireland, singer-songwriter Brendan O’ Shea moved to the United States in the late 90’s. Since then, he was become a veteran of New York City’s songwriter scene and has released two albums which have garnered praise from critics and press around the world.
Irish music magazine HotPress rated his last release Be Here Still an 8 1/2 out of 10 and XM Radio’s Mike Morrone called it one of his “Favorite records of the year.”
Brendan’s songs can also be heard in such films as Ron Howard’s Academy Award nominated film Backdraft and the wildly successful Karen Gehres documentary Begging Naked.
In addition to headlining his own shows in both the United States and Europe, Brendan has embarked on two tours of Japan in collaboration with the Trinity Dance Troupe as well as sharing stages with his comtemporaries The Frames, The Swell Season, Cowboy Junkies, 10,000 Maniacs, Elliott Smith, and Interpol to name but a few.
In 2007 Brendan became a founding member of Fairplay Collective, a unique endeavor in which songwriters have come together to support and promote each other’s individual projects as independent artists.
More recently, Brendan and friend Karl Geary (Sin-e) began hosting a successful Sunday night concert series in NYC’s East Village called the Scratcher Sessions which features musicians from around the world.
With or without a guitar in hand, Brendan O’Shea excels at drawing people in. Brendan is currently preparing his third full length release Songs From A Tenement for a fall 2010 release

Brendan O'Shea "On a Hill"

"Dismantled" by Brendan O'Shea on Alive with Clive

Brendan O'Shea : Who Loves You Now

Be Here Still by Brendan O' Shea, The Scratcher Sessions, 1st of May 2011