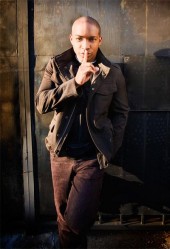 I was born in Los Angeles, CA but spend most of my years growing up just outside of LA in Altadena. I knew that music was in my bones at a very early age. Anyone who knows me would tell you that I've been singing since the day I was born. Always singing and if there's a piano around, I'm playing it. The moment that really got me seriously considering being a musician for life happened in 1993. I was in school and my choir was chosen to sing in the Super Bowl Half Time show with Michael Jackson!! That experience left me desperately wanting for more.more music, and more performing. After high school, I attended the University of North Texas where I majored in voice with and secondary in piano. While at UNT, I continued to hone my skills as a musician while deepening my love for it.

Then came the boyband, YES, I was in a boyband. Don't laugh, we were good! We were based out of Dallas and we were called Sons of Harmony (sounded good at the time). We were put together by Kidd Kraddick from the KHKS (KISS) FM station there. We opened for a ton of artists, including Destiny's Child. We broke up in 2001 and I moved back to LA to continue pursuing my music career.

After a year-long stint at Blockbuster video, I began singing background for Anastacia. From there I moved on to Christina Aguilera, who I toured with for about 2 years. The Grammy's with Justin Timberlake came next.then a short tour with Usher, then back to Anastacia. I had had enough. I needed a break. I realized that I needed some time to concentrate on myself and my own writing and music. I decided to sit 2006 out and just write and produce a record. That record was my "baby". I put my all into it and finally finished it in June '06. I then went on a month long tour with my best friend Zack Hexum to promote the album, and really just have some fun! About a week after I finally got home, my parents talked me into doing something that would forever change my life

AMERICAN IDOL!!!! In Aug. 2006, I stood in the longest line that I hope I'll EVER stand in outside of the Rose Bowl in my hometown of Pasadena, CA. After going through a process too long to type about, I made it all the way to 12th place. Sounds bad, but when you think about it, it's 12th place out of like 100,000 PEOPLE!!! (at least that's what I tell myself when I'm crying myself to sleep.) just kidding! Anywho.now I'm here just trying to continue doing what I love - what I've devoted my life to, and more. So, thanks to everyone who voted for meyou've given me an opportunity to express myself in a way that I never thought possible. The show has opened so many doors for me and I am eternally grateful. I promise I'll pay you back! I'll do my best in everything I do, from music, acting.to.to.TV show hosting. Whatever. LOL

ps. I didn't expect this to be so long. Thanks for hanging in there!

Brandon Rogers. Singing Doctor. Luther Vandross - "A House Is Not A Home" (Cover)

Brandon Rogers - "Back At One" (Brian McKnight cover) #SingingDoctor

Brandon Rogers - "These Are The Times" #TheSingingDoctor

[Vietsub] A Day at the Park - Brandon Rogers