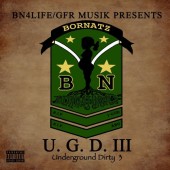 Here to represent VA to the fullest and give the masses real authentic VA street level hip-hop, are the BorNaturals aka Gran Crew. Coming from the Tidewater area of VA, which is known for artist such as Timberland, Missy, Neptunes, and the Clipse , BorNats are the Bad Newz spokesmen putting the Real VA on the map. With their Southeast style of rap, BorNats bring a versatile sound to the table, so everybody can feel their music. Born with a talent to create music and appeal to those who appreciate real talk, BorNats is out to let the world know who they are and where their from! The Bad Newz Way!

The members of BorNats are all from Newport News, Virginia, a place they affectionately refer to as Bad News and have known each other since elementary school. The Bornaturals started out in 1992 with four members: DJ P-Eazy, Rahee, Shalee, and C-Now. And in 1993 DX and Abu joined the group and they produced their first demo “Break It Down” in 1994. “Break It Down” gave the Bornaturals much credibility and notoriety locally, and prepared them for greater things to come. The Bornaturals continued to grow with additional members joining the group, Dolo & Naheem in 1994, I-god and Infinite in 1995. The Bornaturals released another single called “Tear Gas” in 1997, and began to sell tapes & CDs locally creating a bigger buzz. In 1998 they released an EP called “Let Us Move On”, selling multiple copies thru Mom & Pop stores. Their most notoriable song called “Make U Feel It”, was their first single to receive major air play on such stations as 103Jamz (WOWI), 92.1 the Beat, WHOV, and WNSB. Independently making moves their selves BorNats put out a second Cd which was called “Shit’s Official” that had a few singles that got air play from local major and college radio stations. BorNats grind created a big enough buzz to have them doing shows in and out of state.

Life has trials & tribulations, and the BorNats are definitely no strangers to the slings and arrows of outrageous fortune. In 1997 DX was shot six times by NNPD in a traffic stop, and managed to survive with blessings of the most high. But two other members of the group won’t as fortunate. In 1999 I-God died in NNPD custody, and Abu da Butcha died from a stray bullet aimed for someone else. These incidents brought a lot of pain and heartache to the group, causing them to feel anger and almost unable to carry on. But a few members realized that they had one common goal to be successful in the music industry, so Dolo, Rahee, and DX da Truth continued to carry on the torch.

FatRat Da Czar - All Around Da Town - Behind The Scenes

My Time-H.Skywalkah-Smoke The Immortal & Dolo

Looking For The Money
▶ View All Videos