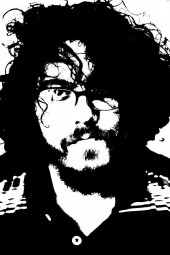 The American Bread EP - Bobby ."center">"It's as melancholy as anything Gram Parsons or The Stones ever attempted in the early '70's, as orchestrally-ambitious as Bowie's most experimental work, and as groovin' as any CCR hit." - Charleston City Paper

"He's forged a musical style that blends smoking country rock and dreamy '80s Britpop in way that must leave Ryan Adams stricken with envy. Those who latch on to From the End. will likely find themselves returning to it for years." - Performing Songwriter

"It is a thoughtful, funny, mournful, bittersweet CD full of haunting lyrics played with an almost psychedelic sentimentality." - Exclaim

"The album paints him as a troubadour with a brawler's mentality, a rough-and-tumble punk rocker and a Gen-Y soul shouter who's not afraid to record a brooding, acoustic tune." - Magnet

has a degree in psychology from the UNIVERSITY OF TENNESSEE -

is VERY afraid of elves -

made 2 albums for Immortal Records with his band BARE JR.

under the stage name JEANNIE STERLING or on you tube at

grew up in HENDERSONVILLE, TN with George Jones and Tammy Wynette

as his next door neighbors-

to his ultimate dream of being STEVEN PATRICK MORRISSEY'S

has toured with- DR. DOG, THE WALKMEN, THE DECEMBERISTS,

CENTRO-MATIC, THE BOTTEL ROCKETS, THE DRIVE BY TRUCKERS,

has been romantically linked to the BOB'S BIG BOY boy-

can NOT speak mandrin chinese-

Check out the official homepage at www.bobbybarejr.com.

Bobby Bare Jr.: 'I'll Be Around,' Live On Soundcheck