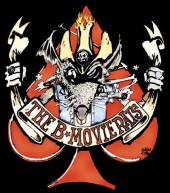 Location:
Los Angeles, California, US
Type:
Artist / Band / Musician
Genre:
Rock
Site(s):
Site
Label:
Rank Outsider Records (USA) *still looking in EU*
Type:
Indie
BioConnections
Misfits
The Stooges
New York Dolls
Supersuckers
The BellRays
Texas Terri Bomb!
ROSE TATTOO
New Maximum Donkey
Trash Brats
DOG TOFFEE
Pat Todd & The Rankoutsiders
Devil Dolls Booking
The Devil Dogs
Dirty Bird
PRV13 PUNK ROCK VATOS
D-Strutters
Angus Khan
Smoking Bird
SKYWRECK
Curt
Rankoutsider Records
Radio Beat Records
NEW!!! There is now an artist page for the B-Movie Rats on facebook with some unique content. Click here and become a fan.
RADIO SUICIDE the full length album is out on Rank Outsider Records and available through CD Baby!
******Click here to listen to clips and buy RADIO SUICIDE now******
Click here for reviews of RADIO SUICIDE!
The B-Movie Rats are a band trying to put the ROCK back in Rock and Roll. Guitars, guitars, guitars. In 1996 (then a 4 piece) the original members got together and decided to start a band that would get back to the basics of ROCK. To master song writing. With a singer, guitarist, bassist, and a drummer (playing a snare, kick drum, high hat, and a cowbell), they set out to take over the world of Rock and Roll.
In the first year and a half, they were known as one of the most intense and hard working bands in California. The music was described as a train rolling out of control down a steep hill on its way to crashing into music history. Fast and Furious, the boys had something to prove to themselves and the world, and succeeded with their debut CD/LP Killer Woman. The debut received critical kudos from all of the top independent and underground press across the globe.
As time has passed, the band has slowly weeded out a major part of the punk in their song writing. As a follow up to Killer Woman, the B-Movie Rats recorded their second full length in New York in the middle of their 3rd U.S. tour. This sophomore effort has been touted as a Master Piece. It is titled Bad For You on Junk Records in the U.S. The European version Make You Bleed (limited to 1000 copies on CD only) was released in November 1999 and has received rave reviews in such European magazines as Metal Hammer, Kerrang!!!, and Ox.
While working out the details of the New York recording, the band recorded 6 songs for a split LP/CD with their Los Angeles counterparts the Hellbenders entitled Distilled. The title of the split came about due to the fact that both bands recorded the material for the split at the Distillery in Costa Mesa, CA. This was yet another progression for the band. Musically more mature and intricate than prior recordings.
In the light of the new Millenium, the band has added a second guitarist and secured a new drummer and are writing their most amazing music to date. Mature, intelligent songs with the same intensity they have always held. With songs that mix the best elements of The Rolling Stones, the Faces, the Who, Rush, AC/DC, Black Sabbath, and the intensity of the bands punk roots, as well as the integrity that is the B-Movie Rats. The band wants to breath life back into a music scene that (they feel) has become stale and unfeeling. To quote a member of the band, "Remember when music made people feel something? When rock was a good time? We want to bring that feeling back!"
The B-Movie Rats have now released their 3rd Full Length album 'Radio Suicide'. The songs were recorded in top end studios that have also been used by the likes of Ozzy Osbourne, Cypress Hill, Foo Fighters, Macy Grey, and more. The end product is amazing and you can hear the tunes and buy the CD here!.
Be sure to check out R3 below in the friends section for 'Rock & Roll Queen'. The latest European release (10").
I edited my profile with Thomas Myspace Editor V3.6!