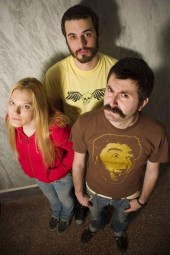 Location:
Genova, Genova, It
Type:
Artist / Band / Musician
Genre:
Indie / Punk / Funk
Site(s):
Site
Label:
Cragstan Astronaut
Type:
Indie
BioConnections
The Mae Shi
the show is the rainbow
Experimental Dental School
Coma Stereo
eat the rabbit
BLOWN PAPER BAGS ARE BACK TO SQUARE THREE
Yeah, oh boy, they finally made it. It took two years to complete this album, three since Ela, Martino and Matteo revamped the project as a three piece. Back to square one as they say, but not from the start, as they already accomplished a couple of tasks before resolving this one. The number three keeps on coming back and they decided to honour it with the very album title. So the right square becomes the third as the square wave is their favourite in those created by their analogic synthesizers. Back To Square Three as the kick off of their new lives, all in their thirties, in the form of eight songs of fast paced danceable punk melodies, crafted in analogic waves supported by roaring drums and bass lines. Between the hiphop Topless Meetings that turns into a crazy tarantella and the anthemic Intimacy Shield, you can lose yourself in the synthpop-ness of E-ink P-ride and Body=Temple. Singing left-wing non-sense Carplates and The Sound Of My Defiance, thought suffering a Short Attention Span Era deja-vu, the album closes in at less than half an hour with the new version of their Manifesto. Blatering about ecological issues as much as personal politics, the new record comes in full Creative Commons License.
-----------------------
Blown Paper Bags are a full blast of fast pop music, influenced by the likes of B-52's, for their male/female vocal dialogues, krautrock era synth harmonies and the irruence of the postpunk bass guitar and drums frontal impact.
Not newbies on the scene, as their debut CD "Arm Your Cameras" hit the shops in 2004 with Suiteside records, followed by 2006 split 7" with Experimental Dental School, on Cragstan Astronaut.
Already toured Europe twice, from Sarajevo to Nottingham and from Strasbourg to Leipzig, will kick off their promotional dates in early 2011.
Blown Paper Bags hail from Genova, north-western coast of Italy, and are more to music than a simple band. Ten years into releasing music with Marsiglia Records, via Creative Commons Licensed free downloads, in recording and producing local bands (such as Japanese Gum, Eat The Rabbit, She Said What?!, Still Leven and Rice On The Record), and, most of all, keeping alive the italian network booking almost 500 shows in their hometown, with the Disorder Drama collective.
-----------------------
Discography
Arm Your Cameras CD Suiteside 2005
Split w/ Experimental Dental School 7" Cragstan Astronaut 2007
Back To Square Three CD Marsiglia/QueSuerte! 2011
songs on compilations:
Milk In My Cup Tastes Like This - CD Marsiglia 2004
Losing Today - CD Losing Today 2005
Zenatron vol.1 CD 2007
Present Tense mp3 Italian Embassy 2010
Brixton - CD Arci Brixton 2010
Altri Giardini - CD Secret Furry Hole 2010
You Probably Thought I'm A Shy Guy - mp3 Shy 2010
port-royal: The Age Of Consumerism - CD n5md 2010
-----------------------
Buy Our Stuff:
Italy: http://www.goodfellas.it
Europe: http://www.mandai.be
UK: http://www.gringorecords.com
Japan: http://www.koiwa-disco.com
-----------------------
WE NO LONGER UPDATE THIS SPACE.
DON'T WRITE HERE.