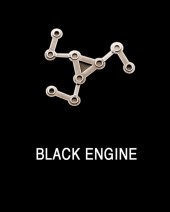 Genetic manipulation of jazz, rock, dub, electronics and noise, itself for itself, thus , Black Engine. Self generating interference. Refuses the genre, even the simple "genre" word

It doesn't need any reason to exist because of its engine essence.

The meeting of 4 sonic navigators with a long experience. 4 minds who, project after project, interfaced their creativity with different sound worlds every time, just following the path of research and evolution. Without compromise or rest.

It deconstructs itself event after event mutating toward sonic forms more and more intense; unknown consequences for a sonic experiment.

From jazz to hip pop, from industrial to ambient, during all these years Bernocchi and Zu explored new territories playing and improvising with an endless series of italian and international artists.

Enriching themselves with experience, estimating each others from a distance,

The new album will be recorded in april 2008