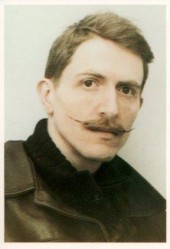 Location:
Chatham, UK
Type:
Artist / Band / Musician
Genre:
Garage
Site(s):
Site
Type:
Indie
Bio
William Charlie Hamper – aka Billy Childish – is reputed to have recorded 100 LP’s during his 24-year career. As if that’s not enough to be getting on with, he’s also painted 2,000 odd paintings, written 2 novels & penned 30 plus volumes of poetry.

Born in 1959 in Chatham, Kent, Childish left secondary education aged 16, an undiagnosed dyslexic. After being denied entry to his local art-school, Childish began work as an apprentice stonemason at Chatham Naval Dockyard. During his 6 months on the job (the only conventional employment he has experienced in his 42 years) he produced 600 drawings in the "tea huts of hell". This portfolio eventually earned him a place at St Martin’s School of Art studying painting. Unfortunately, due to his outspoken views & rude writing, he was expelled & signed on shortly afterwards. Childish has continued to paint, write and make music independently ever since.

Billy Childish formed his first band, The Pop Rivets, in response to the Punk Rock explosion of 1977. Already a big fan of 50’s r'n'r and English r'n'b, a combination of alcohol & boredom inspired him & his cohorts, Bruce (gtr), Big Russ (bass) & Little Russ (drums), to embrace the new breed. Childish, unable to play an instrument at the time, took the vocal duties. They soon established a modus operandi; small gigs for little or no money – building a following on word of mouth alone. They then borrowed £300 from a friend’s Social Security back pay & set about recording the "Greatest Hits" LP, released in 1979. The band played gigs in Switzerland & Germany in the same year & recorded a 2nd LP, "Empty Sounds From Anarchy Ranch" & two further EP’s before splitting up in 1980. A CD covering this era, "Fun in the U.K. ".

Childish has continued to make music ever since under a variety of different monikers (Thee Milkshakes, Thee Mighty Caesars, Thee Headcoats) – never veering far from the path mapped out with The Pop Rivets, only simpler. A great believer in artistic & cultural devolution, he is the veritable epitome of the homemade ethic. He makes music because he enjoys it – simple as that. Ask him if he considers himself prolific & he’ll counter that all other artists release far too few LP’s (or possibility to many). After all, any Childish band has always been able to knock up an LP in a couple of days. Thee Milkshakes once (in)famously released 4 LP’s in one day because they were told they released too many records and were committing commercial suicide.

Childish bands have long been championed by a succession of more established artists; Kurt Cobain liked Thee Mighty Caesars, & more recently Jack White appeared on TOTP’s with Billy’s name scrawled on his forearm after the BBC refused to let them have Billy paint on stage with them during their performance. This kind of artistic adoration finally bore more than platitudes with a deal with Transcopic Records (Graham Coxon’s label) for the latest Childish incarnation, The Friends Of The Buff Medway Fanciers Association – aka; The Buff Medways (a breed of chicken bred in Gillingham for the tables of exclusive London hotels prior to WW2). Childish knows which types of chickens they need to re-introduce the Buff Medway, but a hungry fox has temporarily brought the process to a halt.

Childish has the integrity & patience to wait for his recognition, regardless of the fickle nature of fly-by-night fashion. Neophytes & long term admires are welcomed in equal measure – in the grand scheme of things, Billy Childish isn’t going anywhere. Like a reliable family run garage or a trusty old armchair, he’ll remain until the roof caves in or the stuffing falls to the floor – only then will future generations fully appreciate his true worth. Maverick.

I edited my profile with Thomas’ Myspace Editor V3.6!

You Are All Phonies