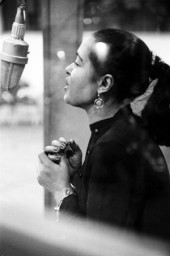 Location:
New York, US
Type:
Artist / Band / Musician
Genre:
Lounge / Electronica / House
Site(s):
Site
Label:
Legacy Recordings
Type:
Major
BioConnections
Nina Simone
AC/DC
Sly & The Family Stone
Legacy Recordings
Billy Joel
Billie Holiday is widely considered the greatest jazz vocalist of all time. During her legendary career, Lady Day crafted a seminal vocal style which changed pop singing forever. It is this distinctive vocal delivery, marked by a uniquely instrumental tone (often like that of Armstrong’s trumpet or Young’s saxophone,) laconic poise and emotive poignancy that makes Holiday’s recordings so instantly recognizable. And yet with such public admiration, so too did she lead a deeply tumultuous and troubled private life; Billie Holiday grew up in poverty and suffered a string of abusive relationships, periods of depression and lifelong substance addiction. Her unfortunate intimacy with racism and sexism, however, was matched with a brazen artistic spirit which enabled Holiday to break down barriers throughout her extraordinary and prolific career. The anguished, moving “Strange Fruit” exposes the historically-heinous racial brutalities of southern United States, while songs such as “God Bless the Child,” Don’t Explain” and “Lady Sings the Blues” have become jazz standards. Billie Holiday was posthumously inducted into the Grammy Hall of Fame, forever cementing her stature as an unequaled interpreter of song.

the launch of Nina Simone's Remixed

second installment in this critically acclaimed series. The most heartfelt

most groove-worthy remixers of the 21st century. Remixers include Tony

Organica, and more. The result is this 14-track gem-a

heart-stopping manifesto of love, beauty, rhythm and poetry that beguiles,

teases, and embraces the sweet spot of absolutely anyone with an open mind.

Created with the utmost respect for Lady Day, this disc is certain to appeal to

fans of both jazz and electronica. This edition of Remixed & Reimagined features some of the best young musicians around today, including trumpet player

Fabio Morgera (from the

and Lady Day Mecca (from the

Had she been born 70 years later, there's little doubt that this is the kind

indeed. But in the most beautiful way possible.

night clubs for tips while working as a prostitute to survive.

a packed Carnegie Hall during the period of segregation.

was posthumously inducted into the Rock and Roll Hall of Fame & received the Grammy Lifetime Achievement Award in addition to receiving a United States Postal Service-sponsored postage stamp in 1994.

impact on other artists is undeniable. She has influenced artists like Janis

Joplin, Diana Ross, Nina Simone and in 1988 U2 released Angel of

Harlem a tribute to her.

struggle against racism and sexism her entire career. She is now considered

one of the most influential female vocalist in jazz, pop, and blues.

The above Billie Holiday album cover is now available as a canvas art print exclusively from Icon Collectibles. Check out their website for more information about this print and how you can own a rare piece of music history.

Billie Holiday - The very thought of you

Billie Holiday - Crazy He Calls Me
▶ View All Videos