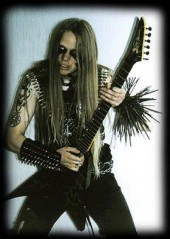 In that same year, 1990, BEHERIT released 3 demos ("Seventh Blasphemy", "Morbid Rehearsals" and "Demonomancy") and a picture 7" EP ("Dawn of Satans Millennium"), the latter released by German Turbo Music. These releases & some live shows gathered already a rather large following, aswell as media attention from the local newspapers. One even featured an article on BEHERIT, with a huge photo of Nuclear Holocausto holding a mutilated pigs head above his head on stage, with the linear note: "Also the pig joined the Black Metal party". In 1991 Turbo Music released a split 7" EP with DEATH YELL (Chile) and the infamous "The Oath of Black Blood" LP/CD, which was nothing more but a bootleg, released without permission of the band. It only consists of the "Demonomancy" demo and the "Dawn of Satans Millennium" EP, but nevertheless it gained them more notoriety among the underground fanatics. Due to this bootleg, BEHERIT wanted to take a new start under the monicker THE LORD DIABOLUS and released a demo. This appeared more to be a statement rather than a new beginning, as a new promo was released in 1992 again under the BEHERIT name. They were back on track and the new material were lugubre omens of a new album. In 1993 the second BEHERIT album, which is actually their debut album, was released on Spinefarm Records. "Drawing Down the Moon" showed a more developped BEHERIT, more advanced musical skills and mixing non-metal influences into the music. Shortly thereafter, Necroplis Records released a new 7" EP, the first one with a drum machine, who marked the beginning of a new era in BEHERIT's existence.

1994 was the year of the release of "HV418ovC.21". This new album was completely non-metal, a mixture of dark ambient and electronic music, no longer what BEHERIT used to be in the musical sense. In 1996 a new electronic album was released, and this was the last one aswell. BEHERIT was terminated, as Nuclear Holocausto had no interest anymore to be active in a metal band. He formed an ambient project, SUURI SHAMAANI, and declared BEHERIT will never be resurrected again.

Many more bootlegs have been released since BEHERITs demise and theyre still present nowadays, as they influenced a whole generation of Black Metal bands. The legacy continues.

I edited my profile with Thomas Myspace Editor V3.6!

Beherit - The Oath of Black Blood