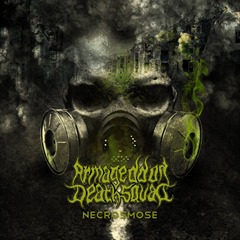 Type:
Artist / Band / Musician
Label:
Great Dane Records
Bio
Formed in February 2009, Armageddon Death Squad is a French Death Metal band. It made its first weapons multiplying cover songs with a 3 guitars lineup few time before writing its first songs.
At the end of the year 2010, the band played live for the first time and changed its lineup to be more efficient with just dual guitars.

In 2011, the band enters the Museion Studio (Fr) and recorded two songs, including ‘’The Comet’’, the song that ends many of the ADS shows. The same year, Armageddon Death Squad starts playing out of Alsace.

Next years, with a strong lineup, the band took the time to develop its own musical style, a balanced mix of modern techniques and old-school atmospheres.
The first album, untitled Necrosmose was released in September 2018, and contains 12 songs, and is re-released in July 2019 by Great Dane Records with one bonus track.