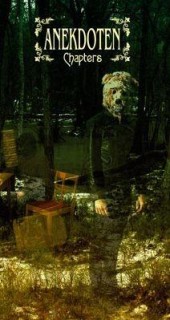 Location:
Stockholm, Sv
Type:
Artist / Band / Musician
Genre:
Experimental / Progressive / Psychedelic
Site(s):
Site
Label:
Virta, Stickman (Europe), Disk Union (Japan)
Type:
Indie
BioConnections
Porcupine Tree
King Crimson
Riverside
Dungen
Motorpsycho
Paatos
Morte Macabre
Alamaailman Vasarat
Equus
Emma Nordenstam
Theo Travis
Comus
Nicklas
RITUAL
Yumi Hara Cawkwell
Anna Sofi Dahlberg
FRVESCENT
Les Memoires de l’Oeil
Tony Geballe
Dubbelorganisterna
PropheXy
Nigel Glockler
Anekdoten are considered one of the leading bands in contemporary progressive rock. Their intensive, dark, dynamic and for each subsequent release more original music have also made an appeal among metal-, goth- and post-rock fans all over the world.
Anekdoten was formed in 1991 by Anna Sofi Dahlberg, Nicklas Barker, Peter Nordins and Jan Erik Liljestr�m and the line up has remained intact since the beginning. Anekdoten has released 5 studio albums on their own Virta-label and 3 live albums in Japan. The Anekdoten album sales have exceeded 85 000 copies.
Their debut album ‘Vemod’ was released in 1993 and caused a considerable stir within the prog community. The success of the debut album opened up for both a first European- and American tour in 1994.
The follow up ‘Nucleus’, released late 1995, was an uncompromized, grungy and distorted affair. Some found it too heavy and diabolic, others found ‘Nucleus’ to be a leap forward for the band. ‘Nucleus’ confirmed the band’s status within the prog community and is considered a cult album by many of the fans.
Anekdotens third studio album ‘From Within’ was released in 1999. On ‘From Within’ the band moved slightly away from the 70's influenced progressive rock of its predecessors and towards a more contemporary sound.
Their fourth album ‘Gravity’ is perhaps their most accessible. It was released in 2003 and divided the fan base into two camps - those who thought that Anekdoten had become too mellow and those who found that they were getting better and better.
The 5th Anekdoten studio album “A Time Of Day” saw the light of day in April 2007. The hands-on, D.I.Y-approach they’ve adapted since the beginning made them release also this album (CD/LP) on their own label. On ‘A Time Of Day’ the band plunges deeper into their very own universe, still not willing to make any musical compromises. The band consider ‘A Time Of Day’ to be their creative high-point so far and many fans agree.
Anekdoten did some live dates in Scandinavia, including an appearance at the Sweden Rock Festival, in conjunction with the album release. In January 2008 the band returned to Japan for a few dates and in May a European tour followed.
Anekdoten's reputation as a great live act was already established after their performance at Progfest 94 in Los Angeles. They have been touring in Europe numerous times, played in the USA three times and Japan twice. They have also performed in Canada, Argentina, Brazil and Mexico.
The Japanese Arcangelo label have released 3 live albums by Anekdoten:
- a 4 track mini-CD called ‘Live EP’ (1997)
- the 2-CD ‘Official Bootleg, Live In Japan’ (1998)
-the CD ‘Waking The Dead, Live In Japan 2005’ (also released as a 2 LP by the band)
At the moment the band is doing songwriting and recording for an upcoming release.

Anekdoten - Until All the Ghosts Are Gone (2015, Full Album)