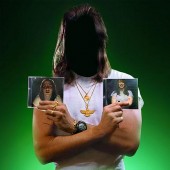 Location:
Manhattan, US
Type:
Artist / Band / Musician
Site(s):
Site
Type:
Major
BioConnections
B-ROC
Lee Scratch Perry
BAD BRILLIANCE
WOLFITOUT
Aleister X
Skyscraper Music Maker
WHO IS ANDREW W.K.?
Andrew W.K. started playing classical and jazz piano at age four, joined his first rock band at 14, and was recording albums and movie soundtracks before he was 20. So he was already a seasoned performer when he leapt to fame in 2001 with his now classic party anthem rock album "I Get Wet," (#1 Billboard Heatseekers) with its hit track "Party Hard." The album was named "#2 Rock Album of the Decade" by Rhapsody, and Andrew was declared "the Savior of Rock and Roll", and the "#3 Greatest Rock Star of the Decade"by NME magazine in the UK. He has continued to produce and perform, garnering a Grammy nomination for his work with reggae music legend, Lee "Scratch" Perry, and creating a #1 hit international ringtone in Japan.
Andrew W.K.'s charisma as a performer naturally led him to television. He's the host of Cartoon Network's hit show "Destroy Build Destroy," now in its third season with over 1.7 million viewers a week. He has hosted awards shows for VH1 and Revolver heavy metal magazine, appeared frequently on MTV, MTV2, and Fuse, performed on Saturday Night Live, appeared on the Simpsons, Conan O'Brien, The Daily Show With Jon Stewart, Politically Incorrect with Bill Maher, and many others.
Never one to sit still, Andrew is also the co-owner and designer of Santos Party House, the most award-winning music venue and nightclub in New York City. He is also highly in demand as a motivational speaker. In the past several years Andrew has given lectures at Harvard, Yale, Carnegie-Mellon, New York University, Cooper Union, and the SXSW festival, as well as delivering the keynote speech at the CMJ music conference.
Andrew loves life, people, and connecting. He is always the heart and soul of whatever party he's attending.
Press and media inquiries:
Beau Benton at 42West - Beau.Benton@42West.net
office: (212) 277-7555
mobile: (646) 467-9055