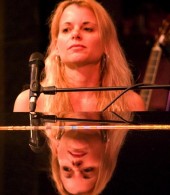 AKS version of "Only Love Can Break Your Heart" was chosen from all submitted to be on a Neil Young Tribute Cd (American Laundromat Records) due out in the fall. This is a huge honor, and all proceeds used for Breast Cancer Recovery. See top friends for more info.

to capture its audience. She has the ability to write songs that vividly paint

"Released in 2003, Seamless has garnered much acclaim in the time

since, and it's easy to see why. Balancing between beautiful and ballsy, the

songs score a knockout on all fronts, lyrically and melodically. . Seamless

talents on Seamless. The L.A.-based Spicer delivers intelligent-pop gems like

the smooth yet pensive title track and the gorgeously understated Falling In".the

familiar strains of warm Americana suit the songs, which are as finely crafted

as anything we've heard from an independent artist in quite some time."

"Her lines are wonderful and stand out: 'listen in for the occasional wind but it just shut up'; 'looks like a page nobody read, lost in the hallways of his head'. Wonderful stuff. I love this stuff. I want to meet her. I want to pick her brain and find out where this stuff comes from. " The musesmuse.com

"Seamless is a plush peach of an album. Amilia draws you in for a bite with her silky voice and carefully crafted lyrics. Recommended."Sing Out! Magazine

"Seamless, like Simon and Garfunkel's Bridge over Troubled Water, sucks you in and doesn't let go until the last note a formidable singer, songwriter and pianist, this gifted young artist seems destined to gain wider acclaim. "Flint Journal

"A fearless performer. in bars, at folk festivals, in house concert settings and in venues surrounded by classical musicians, Spicer has something smart to say."San Antonio Express-News

girl and now resident in L.A., was my overall favorite, both vocally and instrumentally,

on this dreamy lullaby-like track. She’s a singer I could easily imagine doing

a complementary duet with Daniel Lanois."

Songs for a Better Planet

I like hats. I'm a Steelers fan. I swim as often as possible.

Been touring, writing, recording, with a strong inclination for Texas. I sortof disappeared from LA for awhile. I'm back and loving the community of talented people I call friends. The business of music can be a soul-kill if you aren't careful, so I had to figure out how much i'm willing to compromise for my art (not much as it turns out). If life is about balance, hollywood vertigo can mess with the one quest that matters - finding joy. I aspire to live in the state of Namaste. I hear the weather is nice there.

Currently working on a new album (3rd), and a film project. Yes, this in-progress CD is taking a long damn time. Bear with me. Am a sometime- writer for SINGER MAGAZINE, have been a featured columnist for NEW TEXAS MAGAZINE. Current release SEAMLESS took top honors at 2005 DIY music awards (Song of the Year, Producer of the Year with Ed Tree) and was named TOP 12 INDIE RELEASES by INDEPENDENT SONGWRITERS MAGAZINE.

I am a piano player, professional hooligan, have a happenin band here, though mostly tour solo. I sing with some pals around town, and love the whole harmony singin thing on great songs.

A bunch of my tunes have been in movies and TV shows- HBO, Showtime, and several

"Near Apart"- Party of Five and Joan of Arcadia

"Like an Engine" was the theme song for the main character

in a movie called Footsteps. Even over a coupla sex scenes. Uh huh.

Talented folks/cool projects I've sung or played with or for: John Gorka, David Knopfler, Jimmy LaFave, Lowen and Navarro. see amiliaspicer.com for more amazing and impressive hoopla. BYOB Click on the album to find Amilia on CDBaby For Amilia's Music on iTunes (Seamless) (Like An Engine)

Amilia K Spicer - Fill Me Up

"Down by the River" - the 2nd GRIT Family Picknik