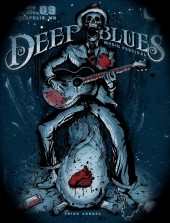 Location:
DENVER, Colorado, US
Type:
Artist / Band / Musician
Genre:
Soul / Blues / Punk
Site(s):
Site
Label:
Pygmy Mountain Music
BioConnections
HILLSTOMP
Charlie Parr
3 Kings Tavern
Black Diamond Heavies
Deep Blues Festival
THE PACK A.D.
GRAVELROAD
The U.C. SWILLERS
TARMINTS
Reverend Deadeye
Moreland & Arbuckle
HILLGRASS BLUEBILLY PHX
SlakJaw
BELLE BLOODCREEK
Welcome to the official American Relay myspace page. We are a two man band. We live in Colorado. We like old music. Hillcountry blues, pre-war blues, old timey folk and gospel, early rock and roll, garage, r&b, motown, soul and stuff like that. We also like some modern stuff too. So we started a band in in 2004 and decided we would make the kind of music we wanted to hear, to create a sound that incorporates the old with the new and that rocks too. We play hard, we like to sweat for you. We don't fit nicely into any genre, and we kind of like it that way. We hope you might too. Thanks for stopping by.

"Corn and Oil" is American Relay's self produced full length LP released June 23rd of 2007 and will be for sale at all future shows and soon on the interweb. Engineered by Clark Hagan (Chet Atkins) and Brett Stuart (Backstreet Boys, Steven Seagal, SNAP) Corn and Oil displays the harmony of analog and digital gear coming into mix with American Relay's throw back sound.