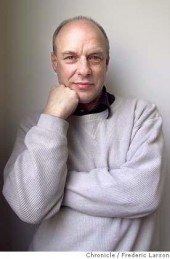 Eno first came to prominence as the keyboard and synthesiser player and general sonic wizard of the 1970s' glam and art rock band Roxy Music (see 1970s in music). After leaving the group, Eno recorded two highly idiosyncratic and original rock albums, before turning to more abstract soundscapes on subsequent albums such as Another Green World (1975) and Ambient 1/Music for Airports (1978). Since then, he has produced dozens of albums (many with similarly-minded collaborators such as Harold Budd and Robert Fripp) which have demonstrated his unique approach to music. He has also occasionally returned to the pop song format.

His production credits include some of the most respected albums by Talking Heads, James and U2.

Contrary to popular belief, Brian Eno did not produce David Bowie's popular Berlin Trilogy (Low, "Heroes", and Lodger). He performed and co-wrote tracks on all three albums, but they were produced by Bowie and Tony Visconti. He did, however, co-produce Bowie's 1995 album Outside.

Eno has pursued several artistic ventures parallel to his music career, including visual art installations, a regular column in the newspaper The Observer and, with artist Peter Schmidt, Oblique Strategies, a deck of cards recommending various artistic strategies.

Eno was educated at the St. Joseph's College, Birkfield, Ipswich (where he adopted the names Jean-Baptiste de la Salle as the school was run by that order of Catholic brethren), Ipswich Art School and the Winchester School of Art, graduating from the latter in 1969. While at art school, he developed an interest in using tape recorders as musical instruments, and he experimented with his first (sometimes improvisational) bands. While at Ipswich, his interest in music was encouraged by one of his teachers, the painter Tom Phillips. Phillips recalls devising "Piano Tennis" with Eno in which, after having amassed a number of second-hand pianos they stripped them and lined them up in a hall striking tennis balls at them. Obviously, as Phillips suggests, "the scoring shots were the best noises." And it was through Phillips that Eno became involved in Cornelius Cardew's Scratch Orchestra. The first released recording Eno was involved with as a musician is the Deutsche Grammophon edition of Cardew's The Great Learning (recorded in February 1971). Eno is thus one of the many voices to be heard in The Scratch Orchestra's recital of Cardew's The Great Learning Paragraph 7.

Eno started his professional musical career in London, as a member of the glam/art-rock band Roxy Music, working with them from 1971 to 1973. As a self-described "non-musician," Eno performed from behind the mixing desk at the band's earliest live shows, where his efforts went way beyond the usual balancing of the volume levels: he would alter the sounds by processing the other band members' instruments through his VCS3 synthesizer, tape recorders and other electronic devices, frequently singing backing vocals as well. Eno soon joined the rest of Roxy Music on stage, where his flamboyant costumes became a hallmark of the band's visual appeal. Eno left the group after completing the tour to promote their second album, For Your Pleasure. By Eno's later account, his departure was partially result of disagreements with Roxy's lead singer and principal songwriter, Bryan Ferry, and partially due to his growing boredom with the life of a touring rock star

Eno embarked on a solo career almost immediately. Between 1973 and 1977 he created four influential solo albums of electronically inflected pop songs Here Come the Warm Jets, Taking Tiger Mountain (By Strategy), Another Green World and Before and after Science. Tiger Mountain contains the galloping "Third Uncle", one of Eno's best-known songs. Critic Dave Thompson writes that the song is "a near punk attack of riffing guitars and clattering percussion, "Third Uncle" could, in other hands, be a heavy metal anthem, albeit one whose lyrical content would tongue-tie the most slavish air guitarist."[2]

During this period, he also toured with Phil Manzanera in the band 801, a "supergroup" that played more or less mutated selections from albums by Eno, Manzanera, and Quiet Sun, as well as covers of classic songs by The Beatles and The Kinks.

He was a prominent member of the performance art-classical orchestra the Portsmouth Sinfonia - having started playing with them in 1972. In 1973 he produced the orchestra's first album The Portsmouth Sinfonia Plays the Popular Classics (released in March 1974) and in 1974 he produced the live album Hallellujah! The Portsmouth Sinfonia Live At The Royal Albert Hall of their infamous May 1974 concert (released in October 1974.) In addition to producing both albums, Eno perfomed in the orchestra on both recordings - playing the clarinet. Eno also deployed the orchestra's famously dissonant string section on his second solo album Taking Tiger Mountain (By Strategy). The orchestra at this time included other musicians whose solo work he would subsequently release on his Obscure label including Gavin Bryars and Michael

Eno continued his career by producing a larger number of highly eclectic and increasingly ambient electronic and acoustic albums. He is widely cited as coining the term "ambient music," low-volume music designed to modify one's perception of a surrounding environment, producing his Ambient series (Music for Airports, The Plateaux of Mirror, Day of Radiance and On Land).

In 1981, back from Ghana and before On Land, he discovered Miles Davis' 1974 ambient jazz dirge "He Loved Him Madly": "Teo Macero's revolutionary production on that piece seemed to me to have the "spacious" quality I was after, and like "Amarcord", it too became a touchstone to which I returned frequently." [3]

Eno describes himself as a "non-musician" and coined the term "treatments" to describe his modification of the sound of musical instruments, and to separate his role from that of the traditional instrumentalist. His skill at using "The Studio as a Compositional Tool" (the title of an essay by Eno [4]) led in part to his career as a producer. His methods were recognized at the time (mid-70s) as unique, so much so that on Genesis's The Lamb Lies Down on Broadway, he is credited with "Enossification" and on John Cale's Island albums as playing the Eno.

Eno started the Obscure label in Britain in 1975 to release works by less-known composers. The first group of three releases included his own composition, Discreet Music, and the now-famous The Sinking of the Titanic by Gavin Bryars. The second side of Discreet Music consisted of several versions of Pachelbel's canon to which various algorithmic transformations have been applied, rendering it almost unrecognizable. Side 1 consisted of a tape loop system for generating music from relative sparse input. These tapes had previously been used as backgrounds in some of his collaborations with Robert Fripp of King Crimson, most notably No Pussyfooting. This methodology (coined Frippertronics) was later used by Robert Fripp, among other artists, on future albums. Only ten Obscure albums were released, including works by John Adams, Michael Nyman, and John Cage. At this time he was also affiliating with artists in the Fluxus movement.

In 1979/80 he collaborated with David Byrne, of Talking Heads, on My Life in the Bush of Ghosts, which was built around sampling recordings and radio broadcasts from around the world. Eno collaborated with David Bowie as a writer and musician on Bowie's influential "Berlin trilogy" of albums, Low, "Heroes" and Lodger, on Bowie's later album Outside, and on the song "I'm Afraid of Americans". Eno has also collaborated with John Cale, former member of Velvet Underground, on his trilogy Fear, Slow Dazzle and Helen of Troy, Robert Wyatt on his Shleep CD, with Jon Hassell, with the German duo Cluster, with composer Harold Budd and others. In 1992, Eno released his take on 'club electronica' titled Nerve Net.

In 2004, Fripp and Eno recorded another ambient collaboration album: The Equatorial Stars.

Eno returned in June of 2005 with Another Day on Earth, his first major album since Wrong Way Up (with John Cale) to prominently feature vocals. The album is different from his 70's solo work, as musical production has changed since then, as is evident in its semi-electronic production.

In early 2006, Eno collaborated with David Byrne to reissue My Life in the Bush of Ghosts in celebration of the influential album's 25th anniversary. He also co-produced Paul Simon's latest album, called Surprise, which was released on May 9, 2006.

ATTENTION! THIS IS NOT BRIAN ENO, THIS IS A FAN PAGE FOR THOSE WHO ADMIRE BRIAN ENO

Brian Eno - There Were Bells

Brian Eno - Who Gives a Thought