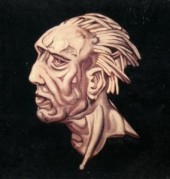 Location:
Melbourne, AU
Type:
Artist / Band / Musician
Genre:
Experimental / Alternative / Down-tempo
Label:
smells like records
Type:
Indie
BioConnections
Sonic Youth
Wendy Rule
Two Dollar Guitar
Rowland S. Howard
Heroin and Your Veins
the stabs
J.P. Shilo
Gabriel Garcia Marquez once remarked that good writers are not always judged by what they say, but often by what they dont say. Hungry Ghosts ventured off into this space, deciding soon after their first rehearsal, that the Art of the Smashed-up-sonic-meltdown was best left to their heroes. What soon followed was an exercise in restraint who could play the quietest, or who could do the least. The result, was the discovery of Silence.

In 1996 after only three performances, they came to the attention of Lindsay Gravina, who instantly fell in love with the group, inviting them on-the-spot to record an album at his Birdland Studio. With Rowland S. Howard in the producers seat, they set about to capture the sounds that would make up their first album.

By 1999, they found themselves invited to NYC, by Sonic Youth's Steve Shelley, who helped create an even sparser album, Alone, Alone, which one reviewer described as, "blessed with the ability to utter a million words with a single instrumental phrase and to turn a melancholy passage into a triumphant climax."

Since then, the band has remained silent, some say they only play telepathically now. I guess well just have to wait.