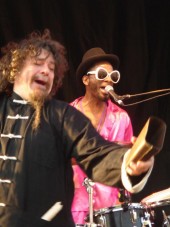 Location:
BALTIMORE, Maryland, US
Type:
Artist / Band / Musician
Genre:
Rock / Soul / Funk
Site(s):
Site
Type:
Indie
BioConnections
Wookiefoot
Blowfly
Jarflys
Snackie
DJ Scottie B
DJ Pufnstuf
Innasound Collective
ALL MIGHTY SENATORS is a Rock & Soul band from Baltimore, that has extensively rocked the U.S. & Canada. AMS released their first recordings under the Baltimore indie label Merkin Records before releasing 3 full lengths under their own Dog Eat Dog Records. Their self-titled full length album was released in late 1994 to both critical & popular acclaim in the Mid-Atlantic. Their live shows, fronted by the charismatic Landis Expandis and guitar wizard Warren Boes, have remained one of the most revered on the East Coast. Although their genre defying sounds have drawn comparisons to such disparate acts as Sly & The Family Stone, Frank Zappa, and Beck, AMS continue to be one of the few true originals. With their latest offering, Checkered Past, New Tomorrow: Essential AMS (1988-2005), AMS have compiled a postmodern musical stew that will make your booty fresh.

"By linking bits of funk, metal, R&B, blues boogie, acoustic instrumentation, and even frank Zappa-isms, All Mighty Senators toss out a sassy, temperamental musical whole that is nothing short of beguiling."

"[Landis Expandis] calls the funky guitar and horn-heavy music he makes 'rock & soul', and it's designed to empower the inner superhero in us all. Oh, and to make you dance. Expandis and his cohorts succeed admirably."

"The Senators are a Halloween party cranked to Spinal Tap's 11.a high voltage party generator"

"Jackpot! All Mighty Senators.can go head-to-head with the liveliest bands out there today."

".arguably the hottest musical conglomeration burning up the East Coast."

"The Senators deliver a fiery hybrid of funk, acid-jazz and hip-hop that demands that you get up and dance your ass off."

".few bands alive can conjure a more urgent call to boogie than All Mighty Senators in fifth gear."

".the buzz surrounding All Mighty Senators rivals that of a swarm of enraged hornets."

"Pumping enough spring and energy to bounce the stage through the floor, All Mighty Senators will undoubtedly blow the headliners right out the door."

"AMS opened the [Grassroots] festival with a Baltimore version of the P-Funk vibe. Whether offering a funked-up version of "Rocky Top", a hip-hop tribute to Jackie Chan, or the chant-along dance number "Flex & Release", the quintet held its own as rock improvisers."

The All Mighty Senators Live!

All Mighty Senators -Flex And Release