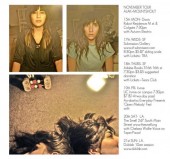 Location:
California, US
Type:
Artist / Band / Musician
Genre:
Visual
Site(s):
Site
Label:
Kaleidoscope, Folk Tale, Nigh
Type:
Indie
BioConnections
Agent Ribbons
French Quarter
Aaron Ross
Baby Birds Don't Drink Milk
Coal Beautiere
Vaginals
Adam Lipman
billygoat
whitman
Pregnant
Mill Race
Morgansorange
dead western
patten
Brad Dunn
FANCIE
WOMAN YEAR
Sasha And The Shamrocks
Los Webelos
Foot Ox
Zach Hill
Gilgongo Records
zecki am sun
AFTERNOON BROTHER
Desolation Wilderness
BeastCloud
folktale records
My feral kin
American Gil & The Major Dudes
Kaleidoscope
loomfixer
The Randal Gatz
ALAK is the moniker for Placerville (CA) based artist and musician Jocelyn Jade Noir. Largely inspired by the environment in which she grew up, Jocelyn writes songs in a surreal but accessible way about dream imagery, the inadvertent loss of physical and spiritual control and the mysteries of all things natural. The songs are based in pop structurally, and are always accompanied by Jocelyn’s unique guitar style, vocals, and lyrical ambience. To compare the sound to any particular genre would be difficult, especially considering how the music has/and is in a constant state of evolution. Lauren Strain in the June 2009 issue of ‘Plan B Magazine’ described it as: " Sinister and vulnerable and unrepentant, Alak's notes are good and bad karma, pluck and luck and despair. a conspiratorial meeting of your inner voices in broad nightlight."
ALAK has toured the United States extensively, has made it on to several top 10 lists for Davis, CA’s college radio station 90.3FM, and was nominated two years in a row for Best Experimental Band in the Sacramento Sammies Awards (winning the category in 2008). The current band lineup includes: Jeannie Masterflash, Kali Williams, and Jon Coontz on drums. ALAK is in the process of recording a new album entitled ‘GROUPS’, which is due out in early 2011. The band is also making arrangements with Placerville solo electronic artist ‘Pregnant’ for another U.S. tour in the Fall of 2011.
PAY-WHAT-YOU'D-LIKE DOWNLOAD OF LAST SUMMER'S 4 SONG EP 'I DON'T FEEL ANYTHING'

ORDER THE LAST ISSUE OF THE PLAN B MAG HERE: http://www.planbmag.com/shop/

" Exposing oneself to ALAK's black cauldron for forty-two minutes proves to be a more than satisfying proposition."
---- http://www.textura.org

" Each song is unique in its implementation and the lyrics filter through like the lines of a spoken word poem. Alak's melodious and experimental combinations make the album rather beautiful and accessible. I highly recommend that you pick it up and get cozy."
----Clinton Gibson/KDVS

Alaska Thunderfuck - This Is My Hair [Official]

ALAK - My Love Is The Best (Patten Remix)

ALAK - my love is the best

Alak my love is the best
▶ View All Videos