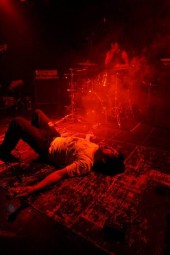 Location:
SI
Type:
Artist / Band / Musician
Genre:
Hardcore
Label:
Maverick Records
Type:
Major
BioConnections
SHEEVA YOGA
Elodea
With Engine Heart
What They Fear
The Hoax Program
Shiv
HumanHostBody
MKDC POSTOJNA
AKEDEIA (from the ancient Greek: akedeia = indifference) was a four-piece hardcore band from Slovenia. The band formed in 2004 when the members, then playing in two different really slow bands (musically and wittily), decided that they wanted to play something faster and more extreme. Coming from different musical backgrounds our music was influenced by a variety of bands.

In january 2008 Andrej decided to leave the band, but the other members felt it was worth keeping the line-up, and make new stuff, but our new jobs and / or college "careers" prevent us from practising too often, so you can expect our new material somewhere in the year 2042.

In our short existence we relesed a CD which can be acquired from akedeia@gmail.com

We edited our profile with Thomas' Myspace Editor V4.4, but we ain't proud of it.