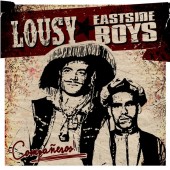 Add some anger and experience, some hardcore (not this so called newschool shit) and some punkrock - Lousy is ready!

The band exist over 11 years and they played so called Aggro Punk,

which means no more as an exploding mix between the aggression of Hardcore and melodic Punkrock. The name was created from a swedish fanzine which describes the music of Lousy in the best way.

and A good round deserves another via Bandworm 2006 ), a DVD to the 10th anniversary called 'Memories & Calories' , one European tour with Englands legend GBH, a tour through russia, five times at the biggest german festival for punk and metal (www.withfullforce.de) and many shows with bands like Agnostic Front, Blood For Blood, Madball, U.S.Bombs, Bonecrusher, Turbo A.C.'s, Oxymoron, Loikaemie, Smoke Blow tell an own

Finally, the music which Lousy plays is accept and support in punk and also

hardcore. But the best way to check out the music from Lousy is to go to an

concert with them and feel the AGGRO-PUNK!

When This Lousy War Is Over From Oh What A Lovely War!

of Montreal - Lousy With Sylvianbriar ALBUM REVIEW
▶ View All Videos