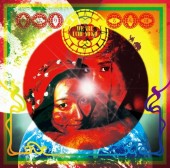 People who are in Europe must buy!!!

People who are outside Europe must wait!!!

INTERVIEW is up! In Spanish and English.

AFRIRAMPO will finish on June 2010 after this tour.

We really really appreciated for our all fans, friends,

families, all people who love us for this 8 years .

We always have been supported by everyone!

THANK YOU SOOOOOOOO MUCH !!!

We will go back to our each planet

We are really sure to finish afrirampo NOW.

We feel it is necessary .

We want to grow up more and more and cleaning our each planet!

We want to keep to play when we really want to play together.

This is FINISH TO START!!!

We are so exciting for new our future!!

If our mother of monster say "PLAY!PLAY!together!!", then we will play!

stay in Cameroon for few months

toured in Europe with Sonic Youth

released album "A' " on AcidMothersTemple label

you can listen "URUSA IN JAPAN" here (JAPANESE)

show in All Tomorrow's Parties (curated by Vincent Gallo)

you can order on http://www.p-vine.com/

shows for All Tomorrow's Parties in Australia

show for All Tomorrow's Parties (curated by ATP) in UK

from new album “WE ARE UCHU NO KO”