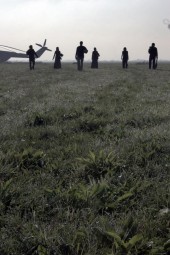 Afion is an acoustic band whose members are drawn together by their love for playing traditional songs. Although they dont like to be put in the generally accepted niches of the existing musical genres, because of the diverse styles brewed into their repertoire performed with use of traditional and classical instruments in a way that resembles traditional sounds, they can be described as a band whose musical starting point emerges from the wide and free waters of world music.

The foundations of their whole musical expression are traditional Croatian, Macedonian and Bosnian songs with individual journeys to Armenia and Kosovo. The widest range of human experiences, from sadness and longing to happiness and exhilaration is expressed through ritual songs, cheerful dances, hilarious mocking songs and love songs.

The main attributes of Afion are their lack of pretentiousness and their naturalness. When they are on stage, their goal is to have fun and relax.

During the period of little more than four years of active performing they had around two hundred concerts in Croatia, Bosnia and Herzegovina, Slovenia, Serbia, Russia, Sweden, France and Shetland Islands where they, on every occasion, have been able to make audience dance or to touch their feelings.