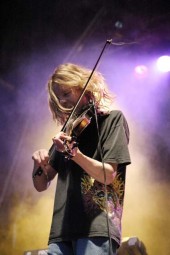 Location:
Scotland, US
Type:
Artist / Band / Musician
Genre:
Celtic
BioConnections
Rob Zombie
Herbie Hancock
Peatbog Faeries
Metallspürhunde
Tim Edey
Paul Jennings
Peter Tickell
Rachel Newton
BRAMAX
Findlay Napier
The Shee
Session A9
John Somerville
SPAD
Fergus Mackenzie
Vicars of Blyth
Somhairle MacDonald
Babelfish
Speirsy Spiersy
Iain Copeland
Hello, my name is Adam. I've been playing the fiddle for 24 years. Roughly five years into that I started writing music as well. I started learning from the late Donald Riddell in 1987, and attended the Inverness Strathspey and Reel Soceity on a Monday night, which Donnie led. Shortly after he passed, I started attending a summer school which took place in the Gaelic college 'Sabhal Mor Ostaig' in Sleat, Skye. The tutor and source of huge inspiration and motivation for me and many others was Alasdair Fraser, and our family attended the course religiously for the next few years. I won a scholarship to V.O.M fiddle camp when I was 17 so we made it over there too. I had a few classical violin lessons in my teens, played in the Spectrum Centre Youth Orchestra led by Alex Sieczcarek, also sung in a cathedral choir. The choir weekly schedule: 1 hour on a tuesday, 1 hour on a thursday, two hours on a friday and two services on a sunday for 8 years. I have also spent some time at the R.S.A.M.D.
I've been travelling around the world playing being a general vagrant but also had the pleasure of playing the fiddle with many different acts for 7 years or so. Borneo, N.Y.C, Australia, Europe, and a large number of places in Britain, particularly Scotland. Bands (which to varying degrees) I've played with, roughly starting from when I started gigging; The Scottish Stepdance Co, Fire in the Bog, Croft no Five, Dochas, Babelfish, Session A9, Finlay Macdonald Band, Salsa Celtica, The Peatbog Faeries, Cuillinn Music, Frog in Throat, SJP Voyager, Treacherous Orchestra, Avernish, Waste Management Sub-commitee of Babelfish, The Nostalgia Boys, The GrouseBeaters, low-tide revelry, and a bit of 'pub-fiddle' Runrig's newest C.D. I've also had the pleasure of joining Brian Finnegan in one of his solo projects. My two biggest commitments though are the Peatbog Faeries and Session A9. Babelfish rises now and again, most recently (albeit without poet Jock) at the Rock Ness festival. Also look out in the near future for a new act in the brewing featuring the talents of box playing north sider John F Somerville - 'The Nostalgia Boys'. Cheers all !

'Eroticon VI' and 'J.J Finlay's' from 'The Errogie Collection by Adam Sutherland