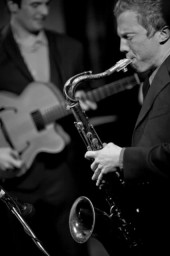 Location:
New York, New York, US
Type:
Artist / Band / Musician
Genre:
Jazz / Nu-Jazz / R&B
Site(s):
Site
Type:
Indie
BioConnections
Hailey Niswanger
Grace Kelly
greg chaplin
Sean Mullins
Bryan Carter
Joel Luxenberg
Originally from Normal, IL, Saxophonist-Composer and Rico Reeds Performing Artist Adam Larson, began playing saxophone at the age of 11. At age 19 he was described by critic Howard Reich of The Chicago-Tribune as “ a player for whom the word ‘prodigious’ was coined.” Larson has garnered numerous awards that showcase his abilities as a performer and a composer. Among those was being selected as a member of the 2009 National Foundation for the Advancement of the Arts Jazz Fellows Sextet, receiving the Silver Award for Jazz Saxophone. He was also a member of the prestigious 2008 Gibson/Baldwin Grammy Jazz Ensemble, 2007/2008 Monterey Jazz Festival Next Generation Jazz Orchestra, 2007/2008 Jazz Band of America, 2008 Betty Carter Jazz Ahead Residency Program, 2008 Telluride Student Jazz All-Stars, Jupiter XO Solo Competition winner, and was one of fifteen invitees to the 2006 Steans Institute for Young Artists at Ravinia, Chicago IL. Larson was also featured in the April 2008 Edition of Saxophone Journal.

His permanent residence now being New York City, Adam Larson was recently featured in the March 2010 edition of New York’s All About Jazz, Magazine. Adam was also recently part of a concert series at the Dicapo Opera Theatre in New York City called “Tenor Madness”, where he shared the stage with tenor legends Frank Wess, and Lew Tabackin, as well as contemporary tenor artists Joel Frahm and Wayne Escoffrey.

Adam has played extensively throughout the United States as well as on tours to Holland and Paris, with a tour of Germany scheduled in June 2010. As a member of various groups, he has performed at such venues as The North Sea, Monterey, Iowa City, and Telluride Jazz Festivals. In addition to these prestigious festivals, he has performed at The Jazz Gallery (NYC) the Kennedy Center for Performing Arts (DC), The 50th Annual Grammy Awards GALA (LA), Dizzy’s Club Coca-Cola (NY), and The Chicago Jazz Showcase (Chicago) and the House of Blues (Chicago), to name a few.

Larson is currently in his sophomore year of college on full scholarship at the Manhattan School of Music in New York City, where he studies privately with teachers George Garzone and John Riley. In his short time in the city, Larson has already gained the respect of many of his peers and mentors alike. Since arriving in New York just two short years ago, he has already made his debut as a leader at The Jazz Gallery (NY), The Jazz Showcase (Chicago), and will be debuting at The Blue Note New York in April 2010. Recently Larson’s quintet was selected to perform at the first-ever Jazz Education Network (JEN) National Conference at the University of St. Louis-Missouri, in May 2010.

Focusing on original composition, Larson’s quintet and collective “Beyond the Boundaries”, strive to find a unique sound in hopes of finding its niche in today’s ever-changing music scene.

Who Even Is That? - Adam Larson Quintet @ The Jazz Gallery